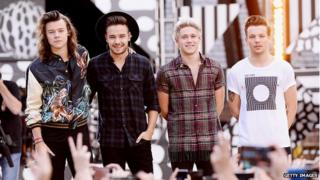 Getty Images
One Direction's new album is expected in the autumn

One Direction have topped the UK singles chart with their new single Drag Me Down.

The track broke streaming records, earning the highest first-week streams for a single in the UK with more than 2.03 million plays.

Drag Me Down is One Direction's first single as a foursome since band mate Zayn Malik left and has had more than 17.7 million streams to date globally.

The band shot the video for 'Drag Me Down' at NASA's headquarters in Houston yesterday.

According to the Official Charts Company, Calvin Harris and Disciples' How Deep Is Your Love climbed from six to two and last week's number one, Black Magic by Little Mix, fell to three.

The top five was rounded off with Lost Frequencies' Are You With Me at four, and Years & Years' Shine at five.

One Direction heading to the top spot

One Direction's Louis 'excited' to become a dad