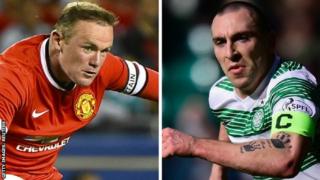 Manchester United will play Belgium's Club Brugge following the draw for the Champions League playoff round on Friday.

Scottish champions Celtic will play Swedish side Malmo, with the first game to be played in Glasgow.

The winners advance to the Champions League group stage, which contains 32 teams from across Europe.

Match Of The Day pundits on new Premier League season