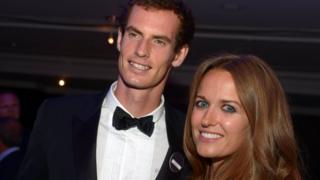 Former Wimbledon champion Andy Murray and his wife Kim Sears are expecting their first baby, his agent has confirmed.

The couple married in the 28-year-old tennis star's hometown of Dunblane, Scotland, in April.

Murray's mother Judy recently told a magazine that she was "really looking forward to being a granny".

Andy's fans were quick to congratulate the couple after news was reported, tweeting him their best wishes.