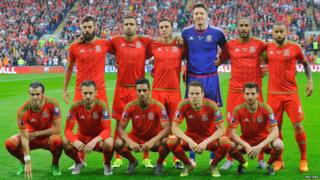 Wales have moved up one place in the latest Fifa football rankings to a new high of ninth.

Chris Coleman's side are now above the Netherlands, who have dropped down to 12th.

England have also climbed a place to eighth. Scotland are down to 32nd and Northern Ireland also drop to 40th.

Argentina remain in the number one spot, with Belgium back up to second and Germany in third.

Aaron Ramsey - 'I was cheeky at school'