"It was one of those days you dream of," Broad said. "It's been the perfect day but it starts again tomorrow."

The cricketer reached the milestone playing in the fourth test of Ashes at his home ground of Trent Bridge in Nottingham.

He went on to take a career-best eight wickets for 15 runs as England bowled out Australia for 60 runs. 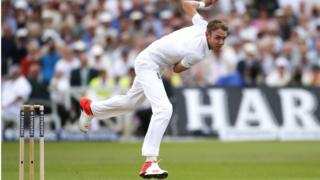 "My previous-best ever bowling was seven for 12 against Kimbolton School Under-15s," Broad added.

England's batsmen added to Australia's misery by scoring 274 runs for four wickets at the end of the first day, a lead of 214 runs.

Victory will give England an unbeatable 3-1 lead in the five-match series against rivals Australia.

Chris Woakes on how to become a super bowler