Malaysian authorities have said an aeroplane part found on the island of Reunion in the Indian Ocean did come from the missing Flight MH370.

International investigators were more careful, however, saying only there were "very strong" signs this was the case.

The plane debris is still being examined by experts in France.

239 passengers and crew were on board the the Malaysia Airlines plane when it vanished on 8 March 2014. 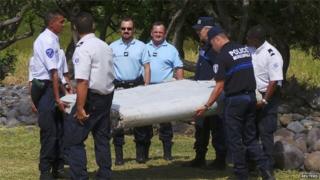 The debris found on the remote island in the Indian Ocean a week ago - a wing part known as a flaperon - was the first possible piece of the plane to be found.

The Australian Prime Minister, Tony Abbott, said the discovery of the wing meant experts were making progress in solving the mystery of the plane's disappearance.