Thousands of people in the Japanese city of Hiroshima are remembering the 70th anniversary of the first atomic bomb being dropped by a US aircraft.

A ceremony, which was attended by 40,000 people, was held at Hiroshima's Peace Memorial Park.

The bombing - and a second one on Nagasaki three days later - is credited with bringing to an end World War Two. 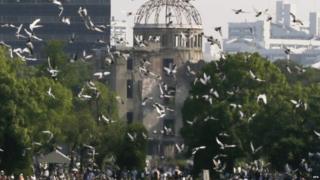 EPA
Doves were released over the Atomic Bomb Dome during the peace memorial ceremony in Hiroshima, Japan

An American B-29 bomber called the Enola Gay dropped the nuclear bomb, exploding some 600 metres above the city on 6 August 1945.

On that day alone, at least 70,000 people are believed to have been killed.

People across Japan have observed a minute's silence to mark the anniversary.

In Hiroshima a bell tolled at 8.15am Japanese time - when the US warplane dropped the bomb that flattened the city centre.

Later in the day, thousands of paper lanterns will be released on the city's Motoyasu River - symbolising the journey to the afterlife of those who died.

Japan's Prime Minister Shinzo Abe, who attended the ceremony at Hiroshima's peace park, said that that atomic bomb not only killed thousands of people in Hiroshima but also caused awful suffering to survivors.

"Today Hiroshima has been revived," the prime minister said, "and has become a city of culture and prosperity.

"Seventy years on I want to reemphasise the necessity of world peace." 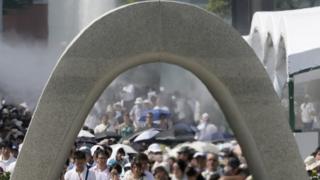 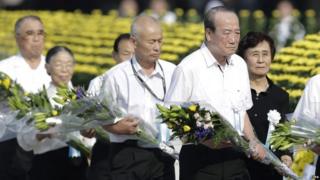 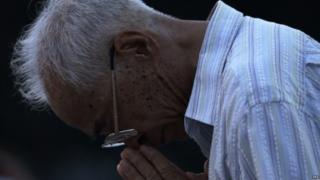 EPA
Prayers were said throughout Hiroshima on Thursday 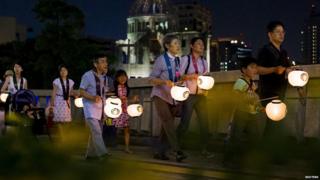 Hiroshima: A look around the Peace Memorial Park