A schoolgirl hoping to complete a record breaking scuba dive could be stopped from making the attempt because she is too young.

WHAT ARE TECTONIC PLATES?

Thirteen-year-old Charlotte had been hoping to become the first child ever to dive between two tectonic plates.

The dive was due to take place in Iceland in September.

But on Monday, the Sport Diving School of Iceland said the rules state that no one under the age of 17 should be allowed to dive in their waters.

Tobias Klose, who runs the Sport Diving School, with whom Charlotte was hoping to dive, told Newsround: "There was a misunderstanding and even though Charlotte is under 17, we thought she would be able to complete the dive because she was fully qualified and learnt to dive outside of Iceland. 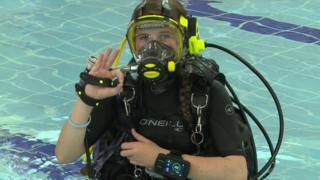 Charlotte has been in training for the record attempt for months

"However we now realise that this will not be possible under Icelandic law."

Charlotte's team say they are now trying to find out whether there is any way the record attempt could still happen.

Watch Ricky's report from her special training centre to see how she's been preparing.