The Hubble Telescope's been orbiting the Earth for over two decades and has taken some amazing images in space.

It has also helped to answer some of the most difficult and interesting questions about planets, stars and the universe.

Now it's being replaced by a bigger better model called the James Webb Telescope. 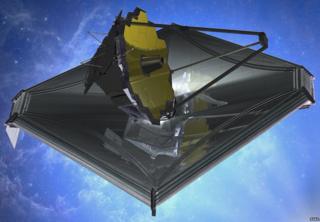 NASA
For years, the James Webb Space Telescope has been just an artist's impression. Now it's taking shape

It's being developed by scientists working for Nasa, the European Space Agency and Canada.

It should take another three years to complete and should be launched in 2018.

It's hoped it will teach us much more about the universe we live in billions of years ago.

Jodrell Bank to be HQ for Square Kilometre Array