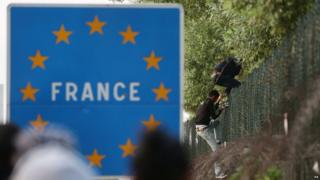 The British and French governments are coming under increasing pressure to deal with the number of migrants and refugees trying to get into their countries.

Thousands of migrants who are camped in Calais are attempting to reach the UK by crossing the English Channel, the stretch of water that separates southern England from northern France.

Many of the people are trying to escape from countries affected by war such as Syria, Afghanistan, Eritrea, and also North Africa.

Some try to jump onto lorries or hold on underneath trucks heading for the UK on ferries or on the Eurotunnel. Others jump or cut security fences to try to hide on Eurotunnel trains themselves.

How long has this been going on?

French authorities predict there are about 3,000 people currently living in a makeshift camp near the port of Calais known as "the Jungle".

They have tried to make the camp as liveable as possible - building shelters, a school and a community canteen.

The British and the French authorities together prevented more than 39,000 attempts to cross the Channel illegally in 2014/15.

That's more than double the number prevented the previous year. 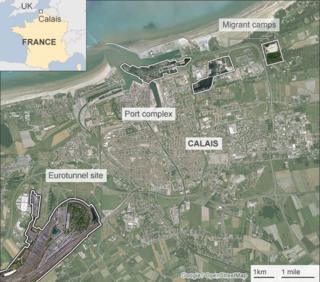 But the migrant crisis is not a new issue.

In 1999, the Sangatte refugee camp was opened in Calais, attracting thousands of people looking to reach the UK to live.

It eventually closed in 2002 by the French government but migrants have still continued to arrive in Calais since then.

Why do migrants want to come to the UK? 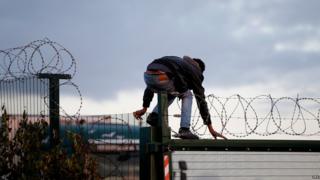 EPA
Migrants climbs over the fence in Calais, France, to try to catch a train to reach England

The situation in Calais is part of a wider migration crisis in Europe - caused largely by people trying to escape from countries affected by war such as Syria, Afghanistan, Eritrea and also North Africa.

Many want to claim asylum in the UK, which means legally moving to a new country for safety reasons.

These asylum-seekers say they are unable to return to their home country because they are scared about the treatment they will receive there. 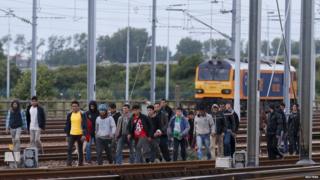 Reuters
Migrants make their way along train tracks as they attempt to access the Channel Tunnel near Calais, France

The British Red Cross said most migrants wanted to make the move because they believed there was a better chance of finding work in the UK.

Some speak English and want to come to the UK to use the language.

Others have relatives in the UK, or believe that there is better housing and education available.

How strong is security in Calais? 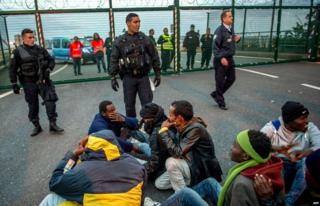 The port of Calais is now protected by five metre high fences topped with coils of razor wire and CCTV, with the area guarded by heavily armed French riot police.

The UK is also sending a fence, known as the "National Barrier Asset", to go up around the Eurotunnel station.

Eurotunnel has spent £9.2m on security in the first six months of 2015 alone, including money for fences, cameras, infra-red detectors and extra guards.

What are French police doing? 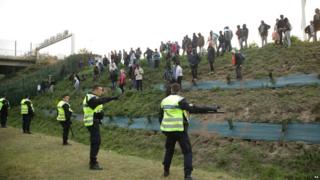 PA
Migrants gather to attempt to run past French police officers guarding the fence of the Eurotunnel site in Calais, France

French police have been widely criticised for taking migrants off lorries, driving them a few miles away then releasing them - free to walk back to Calais.

The problem, police say, is that there are simply too many to arrest and deal with. They also say their focus on the motorway is safety, so getting people off the road is the priority.

An extra 120 French police have been sent to Calais to try to cope with the large numbers of migrants.

French authorities are also struggling to stop illegal migrants crossing its border from Italy, where more than 60,000 people are thought to have arrived by boat from Africa already this year.

How many migrants make it to the UK? 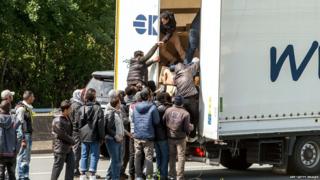 The short answer is, no-one knows.

The government says it does not have official figures or estimates for the number of migrants who illegally cross the Channel.

There were 25,020 official applications for asylum in the year ending March 2015, but there is no way of knowing how many of those people travelled through the English port of Dover.

What is Operation Stack? 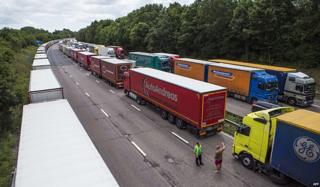 Operation Stack is an emergency operation used by Kent Police to park large lorries on the M20 motorway in Kent - turning it into a giant lorry park.

It has been used since 1996 whenever there is disruption to services between Dover and Calais, due to, for example, the migrant crisis or bad weather.

The motorway can remain closed for days at a time, with thousands of lorries heading for France sitting still, leading to severe traffic delays in areas of Kent.