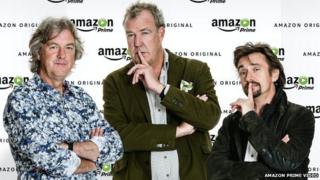 The trio will present three series of a new motoring programme for Amazon Prime, with the first series to be broadcast worldwide in 2016.

The move follows their exit from the BBC Two show earlier this year.

Clarkson's contract was not extended after an incident with one of the show's producers.

His co-hosts then followed him in leaving the show. 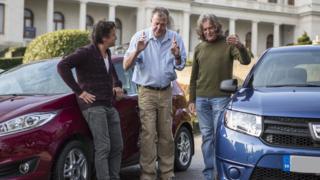 In a statement from Amazon, Clarkson said: "I feel like I've climbed out of a biplane and into a spaceship."

Hammond said: "Amazon? Oh yes. I have already been there. I got bitten by a bullet ant."

And May added: "We have become part of the new age of smart TV. Ironic, isn't it?"

Top Gear will continue on BBC Two, with Chris Evans among the new hosts, who have yet to be confirmed.

Clarkson has been dropped from Top Gear

Top Gear: Chris Evans confirms he will have a female co-host

Should Jeremy Clarkson have been dropped from Top Gear?