A US dentist has killed a lion in Zimbabwe, Africa.

Cecil, the lion he shot, was a massive tourist attraction and famous in Africa for being relaxed around humans.

Mr Palmer said he thought the hunt was legal and didn't know the lion was protected. 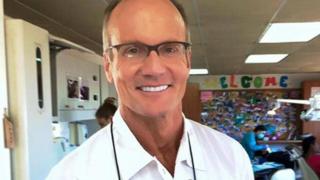 Cecil's death has prompted a huge reaction from many on social media, with tens of thousands of people signing a petition asking for Cecil's killer to be punished for what he did.

Hunting lions is not illegal in Zimbabwe, and in many other countries in Africa, but hunters have to have special permits from the government allowing them to kill certain animals.

Some people in Zimbabwe also argue hunting can have a positive impact.

They say the money paid by tourists can be used for conservation and to create jobs for local people.

Is it right to hunt animals for sport?

I don't think people should hunt animals for sport, it's wrong and what did Cecil do to Walter in the first place? Nothing! It's not fair, money can't buy what that lion gave to us, love. If Walter can't see that he should open his eyes and see what really is important in life - money or love?

I believe that it is a cruel sport that shouldn't be done anywhere because the killing of animals will increase extinction. Even though the killing of animals is still done in certain countries I believe it is a cruel and unforgiving sport. From what has happened I believe that if anyone spends money to slay an animal they should still be arrested. In my opinion if anyone would want to pay to kill an animal I would consider them 'sick in the head'.

I think it's wrong to hunt animals for sport because the hunter doesn't benefit from it and it's strange that someone gets a buzz from taking an animal's life. I know people that hunt deer but they do it for food and appreciate the fact that they've had to kill an animal to get the meat.

It's not right to kill animals or hunt them for sport as they have a conscience and mind. They didn't do anything to harm you, so why should you harm them?

Sport is about feeling good about yourself but killing the eco-system is not a sport especially when a vital animal is killed.

It is certainly not right to hunt animals for sport. How would the hunters feel if a lion chased after them with a weapon (or, of course, without - those teeth can be deadly anyway)? They'd be scared, stressed, and worried. These animals all have a family to go back to, just like us humans do. We can't keep thinking we're the only living things on Earth that matter.

Poaching in Africa at all time high