How did a T. rex chew on its prey? 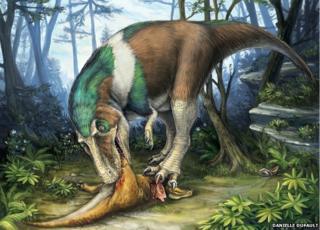 Scientists have discovered how the teeth of meat-eating dinosaurs could rip through the flesh and bones of larger animals.

They used microscopes to examine tooth slices from carnivorous dinosaurs like T. rex and Allosaurus.

It revealed a layered arrangement of tissue inside the teeth.

Like a sharp knife, dinosaur teeth have jagged edges designed to slice through meat.

Teeth are made of tough tissue called dentine, surrounded by an outer coating of enamel.

The researchers discovered special layers of dentine at the base of each serration or groove in the tooth. 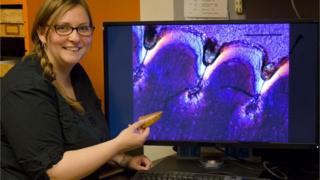 "This helped to enlarge the serration on the inside the tooth," said Kirstin Brink from the University of Toronto, Mississauga.

"It also helped to strengthen it and prevented it from wearing away too quickly while the animal was eating."

Dinosaurs like T. rex survived as a top predator for around 165 million years.

Unlike humans, dinosaurs could grow new teeth to replace lost ones. But this could take up to two years.

Having an internal structure that protected the tooth meant these animals had a stronger and better bite.

The dinosaur teeth in the study ranged from 3-20cm in length, and were taken from museum collections.

The research has been published in Scientific Reports.