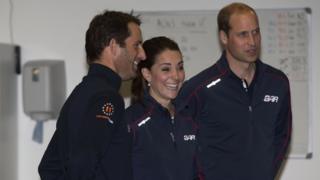 The America's Cup sailing competition was ended early, after extreme weather forced the organisers to cancel the second day of racing.

The Duke and Duchess of Cambridge were among the crowd who had turned up to see the race in Portsmouth yesterday.

They were hoping to cheer on Olympic champion Sir Ben Ainslie as he tried to become the first British challenger to win the trophy.

But the race was abandoned after winds reached more than 30mph. 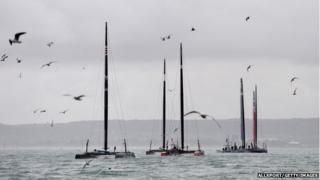 The America's Cup is the most famous sailing event in the world.

It was named after a boat called America, which beat the best Britain could offer in a race around the Isle of Wight in 1851.

It is one of the most difficult sporting trophies to win, with the best sailors racing in the fastest boats against each other. It's a race of speed, strategy and tactics.

"It was the right call because in those conditions the boats would have capsized and people would have got hurt," said Ainslie.

"You can't mess around with these boats, they are very powerful and if they get out of control there is carnage. 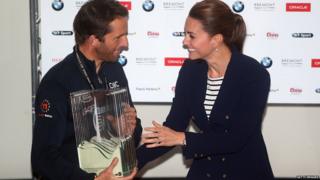 "But we were delighted with the results and delighted to perform well in front of a home crowd. The event has been a huge success and it shows what support there would be if we were hosting the America's Cup here."

Ainslie's boat was first and second in the two races that took place on Saturday, meaning that he still won overall.

The children swapping the classroom for a yacht