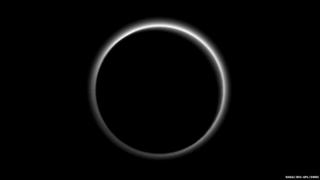 Pluto appears to have flowing glaciers of nitrogen ice, the latest pictures from the New Horizons probe suggest.

Scientists believe they see evidence of surface material having flowed around mountains and even gathering in craters.

The activity is certainly recent, they say, and could even be happening right now.

The mission team say that it has received only 4-5% of the data gathered during 14 July's historic flyby of the dwarf planet, so there's a lot more to discover. 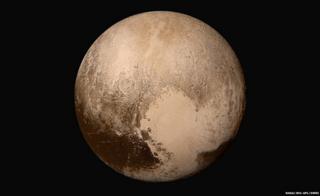 NASA/JHU-APL/SWRI
This is now the best true colour image of Pluto, twice as sharp as the one released just before the flyby 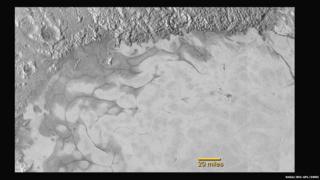 NASA/jhu-apl/swri
Just a small amount of heat from below could be enough to enable the very cold nitrogen, carbon monoxide and methane ices to flow 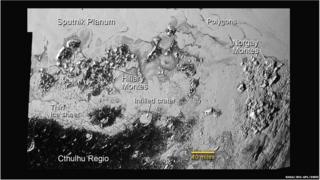 What is a glacier?

Glaciers are made up of fallen snow that, over many years, compresses into large, thickened ice masses.

Glaciers form when snow remains in one location long enough to transform into ice.

What makes glaciers unique is their ability to move. Due to sheer mass, glaciers flow like very slow rivers.