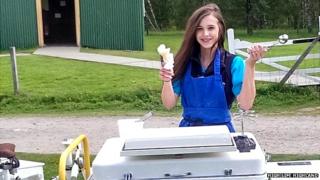 The Highland Folk Museum in Newtonmore, Scotland is claiming they're the first place ever to make porridge ice cream.

More than 800 US exchange students visiting the museum taste tested the food before it is offered for sale from 28 July.

Staff at the museum came up with the idea for the ice cream when trying to think of a food that fitted with Scotland's unpredictable summer weather.

I would create a hot chocolate flavour ice cream.

I would make a mango, passion fruit and pineapple ice cream which takes you through the different flavours one by one!

I would make apple and cinnamon flavour because I love the sweetness of apple with the bitter taste of cinnamon!

I would like an ice cream that is mixed together with bubblegum, strawberry and mango ice cream. It would be pink, yellow and blue and super cold!

Porridge ice cream doesn't sound very nice! I would like a Charlie and the chocolate factory ice cream that changes flavour when you eat it! It would be a starter, main course and desert.

THIS CHAT IS NOW CLOSED.