How do boa constrictors kill their prey? 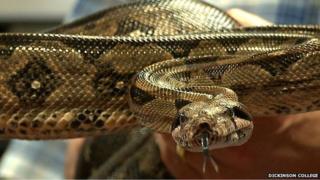 Scientists in the US say boa constrictors don't suffocate their prey as previously thought.

Instead they grip them so tightly it limits the blood and oxygen flowing to the animal's vital organs.

Researchers took several measurements - including blood pressure and heart rate - from rats that had been given an anaesthetic to make sure that they didn't suffer.

Then they let the snakes grip them.

Scientists say it's a very quick, efficient way of finishing off prey. 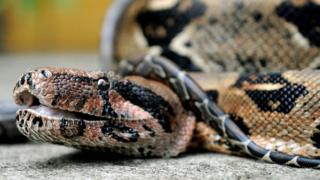 Lead researcher, Professor Scott Boback, from Dickinson College in Pennsylvania in the US, said the rats would "pass out within seconds".

The researchers recorded the snake gripping the rats and looked closely at what happens to the animals.

They took blood samples from the rat before and after death to show how much or little oxygen was in the blood at each stage.

They think this could help them develop new ways of treating humans with crush injuries. 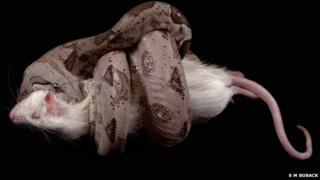 The team say they're also interested in how and why these snakes have developed their unique method of killing prey.

"If the snake is wrapping around the chest, it could also be limiting breathing, too," said Dr Boback.

"But an absence of blood flow will cause death more rapidly than suffocation.''

It's the first time experiments like these have ever been carried out.