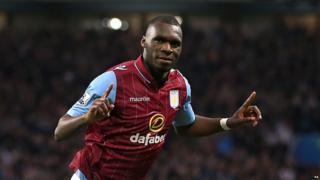 Benteke becomes the Reds' second most expensive signing ever, and the seventh player the Reds have bought this summer.

Belgium international Benteke scored 49 goals in 101 games for Aston Villa after signing for them in 2012.

Benteke missed the 2014 World Cup in Brazil with an injury but returned to action last October and scored 15 times to help Villa stay in the Premier League and reach the FA Cup final.