The number of swans on the River Thames recorded in the yearly count is expected to have risen.

The tradition called Swan Upping started at 9am on Monday in Sunbury, Surrey.

The five-day count also passes through Oxfordshire, Buckinghamshire and London. 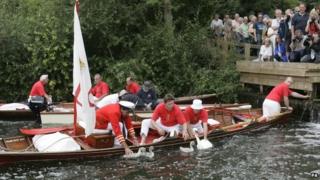 The Queen's Swan Marker, David Barber, who is in charge of the count, said "Our expectations are that numbers should be better than last year."

The history of the swan count dates back to the 12th Century and sees the mute swans on the river rounded up, marked, weighed, health-checked and then released.

Mr Barber said it also served as a "very important conservation and educational exercise", with many local schools taking part in the event. 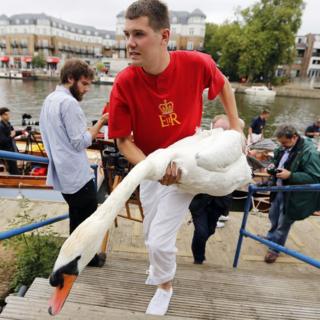 AP
A young Swan Upper holds a swan to be counted

The Queen keeps the right to own all unmarked mute swans in open water.

Killing or injuring them is punishable by a six-month prison term and, in some cases, a fine up to £5,000.

International search for Wally the swan