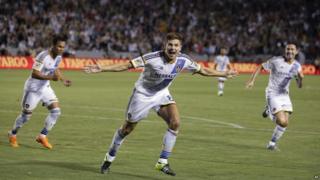 Steven Gerrard has scored on his Major League Soccer debut in America.

Gerrard, who plays for LA Galaxy, helped them to a 5-2 win over San Jose Earthquakes.

The former Reds captain, who was wearing his Liverpool shin pads, said after the game: "I felt like a kid out there again. I didn't want to come off - I want to play as much football as I can. One of the reasons why I've come to this team was to start all the games and play as many minutes as possible.

"I was determined not to become a squad player. I still feel like I've got energy, I still love the game, I'm enjoying training and I'm settling in pretty nicely."

Gerrard left Liverpool in May after making more than 700 appearances for the club.