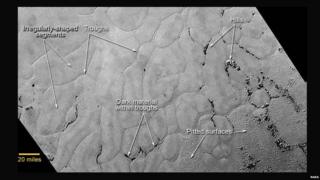 More pictures of Pluto have been sent from the New Horizons space probe.

At the edges, troughs are filled with dark material and even small mounds.

Scientists say it could be caused by the surface bulging due to heating from below.

The icy plains also show dark streaks that are a few miles long. The streaks all go in the same direction and scientists think they may have been produced by winds blowing across the frozen surface. 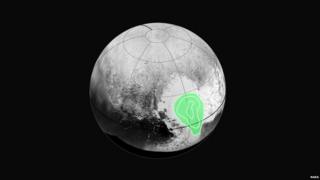 Scientists say this is the "heart of Pluto" and that the green colouring shows an increase in frozen carbon monoxide in this area.

But they've said they are trying not to jump to early conclusions about the pictures, until they get more data from the spacecraft.

The New Horizons probe has so far, only sent back around 2-3% of its data that it stored after the flyby.