Scientists have discovered a new feathery dinosaur in China, which they believe was an ancestor of the Velociraptor.

Experts believe it shows that lots more dinosaurs would have looked like "big, fluffy killer birds". 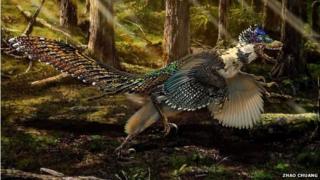 He added that although Zhenyuanlong had wings, it's large body might have meant it was too heavy to fly.

Dr Steve said: "It will blow some people's minds to realise that those dinosaurs in the movies would have been even weirder, and I think even scarier - like big fluffy birds from hell."

The dinosaur has been named Zhenyuanlong, meaning "Zhenyuan's dragon", in honour of the man who gave the fossil to the museum.