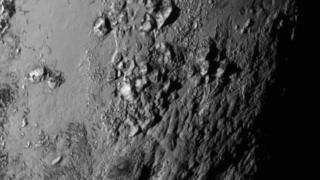 Images captured by the New Horizons space probe have revealed huge mountains made of ice on Pluto.

The mountains are similar in size to the Rockies in Canada and America.

The probe has also captured its moon Charon and small moon Hydra.

On Wednesday, scientists unveiled the first pictures taken by the probe during its historic flyby of the dwarf planet.

The spacecraft sped past Pluto on Tuesday, getting as close as 12,500km and grabbing lots of data.

The Pluto fly-by - as it happened

Mission scientist John Spencer says that the first close-up image of Pluto's surface showed an environment that had been resurfaced by some geological process - such as volcanism - within the last 100 million years.

"We have not found a single impact crater on this image. This means it must be a very young surface," he said.

Scientists have named the heart-shaped region Clyde Tombaugh, after the astronomer who discovered it in 1930. 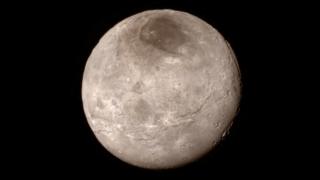 New, close-up images of Charon have also been captured.

"Originally I thought Charon might have an ancient terrain covered in craters... it just blew our socks off when we had the new image," said Dr Cathy Olkin.

"Going from the north-east to the south-west is a series of troughs and cliffs...they extend about 600 miles across the [moon]." 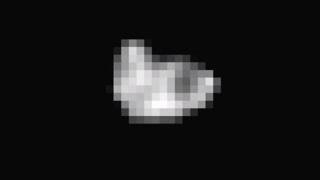 The first well resolved picture of Pluto's small moon Hydra reveals a body with a surface mostly made of water-ice.

Scientists have also come up with a good estimate for its size: 43km by 33km.

The snap contains only a few pixels because the moon is so small and distant.

The amazing pictures were sent back to Earth on Wednesday.

They are a much higher resolution than anything we have seen so far.

The mission team has told New Horizons this week to send down only some of the data it carries.

Part of the reason is so that the probe can continue observing Pluto from its night side.

Scientists want to keep looking at it for about two more full rotations, or 12 Earth days.