Hundreds of people have been evacuated from villages near a volcano in western Mexico because of fears of a major eruption.

Ash from the Colima volcano is falling on local communities, and authorities have sealed off the surrounding area. The local airport has also been closed.

Experts said the volcano was showing signs similar to a major eruption that happened back in 1913.

Explosions have been heard on its southern and south-western slopes and columns of ash have spewed 2.8km into the sky.

The village of Yerbabuena, at the foot of the mountain, was said to be buried in up to 5cm (nearly two inches) of ash. Rain was making conditions worse.

The Colima volcano is also known in Mexico as the Volcano of Fire. 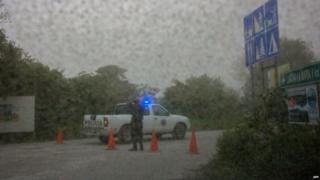 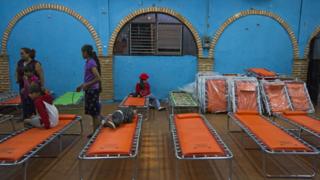 AFP
Emergency shelters have been set up for the evacuated residents