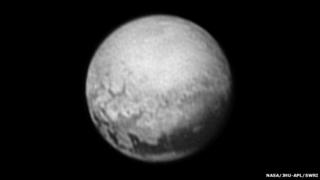 NASA/JHU-APL/SWRI
The image was taken on Thursday from a distance of 5.4 million km

The New Horizons space craft is getting closer to Pluto and pictures it's sending back keep getting better.

The probe's latest picture, released on Saturday, has given scientists more information about Pluto, which is described as a dwarf world.

The new black-and-white picture shows a band of patterned terrain stretching around the globe for roughly 1,500km.

Nasa's spacecraft is due to fly past Pluto on Tuesday, 12,500km above the surface.

At that point, its telescopic camera, Lorri, will be able to get even better quality pictures.

New Horizons was launched from Earth in 2006. It is set to gather hundreds of pictures and other types of research data as it sweeps past Pluto and its five moons: Charon, Styx, Nix, Kerberos and Hydra.

The probe's difficulty is getting all that information back to Earth. The distance to Pluto is huge - more than 4.7 billion km.

The mission team expects it to take 16 months to return everything they discover over the coming week. 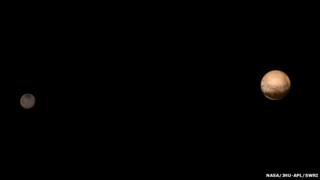