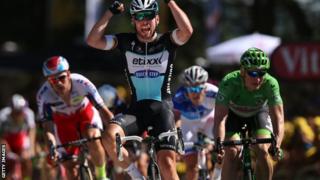 Mark Cavendish got his first Tour de France success in almost two years as he sprinted to victory on stage seven.

The 30-year-old's 26th win takes him two behind Bernard Hinault (28), while Eddy Merckx's record stands at 34.

Cavendish powered past German Andre Greipel about 50 metres from the finishing line in Fougeres, France.

The UK's Chris Froome kept the lead, having got it when Tony Martin left after crashing on Thursday.

Seven of the competition's 21 stages are through mountains, going through some of the highest passes in the Pyrenees and the Alps.

Check out Newsround's guide to the Tour de France.