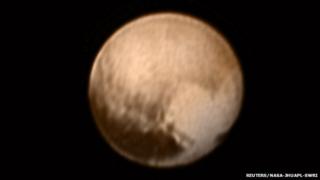 Nasa's New Horizons probe has sent back some of the most detailed pictures of Pluto ever taken.

After nine years travelling and a three billion mile journey, the New Horizons probe is getting closer to the dwarf planet.

The amazing pictures have shown that the planet has a dark area, which scientists have nick-named "the whale", and a light area, which looks like it's shaped like a heart.

New Horizons is set for an historic fly-by next week.

This means the probe will fly around 12,500km above the dwarf planet's surface - the closest we have ever been to Pluto.

John Spencer, one of those working on the New Horizons project from the Southwest Research Institute said: "They're still a little blurry but they're by far the best pictures we've ever seen of Pluto, and they're only going to get better,".