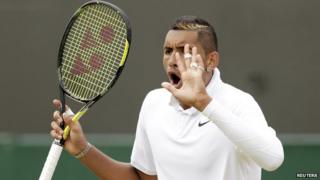 This week two tennis stars from Wimbledon have come under fire for their behaviour on court.

Australian tennis player Nick Kyrgios was booed by the crowd when he appeared to stop trying to play during the second set, and world number one Novak Djokovic has been criticised for shouting at a ball girl.

Here's a closer look at what happened, and some of the other biggest tennis tantrums...

In his match against French player Richard Gasquet, Nick Kyrgios repeatedly kept missing or hitting the ball into the net, after being given a code violation for using bad language on the court.

He also got into an argument with the umpire over taking too long to change his socks in between play.

Kyrgios also hugged a ball boy and threw his racquet into the crowd during the third set - although he escaped another code violation for that offence.

As a result of his behaviour, Kyrgios will be fined £6,000 and will have the money taken out of his prize money for competing. 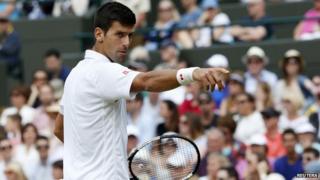 In his match against South African player Kevin Anderson, Novak Djokovic yelled really loudly near to a ball girl, which caused her to become upset.

The player insists he didn't shout at her on purpose and said: "I'm sorry. There was nothing towards her. Maybe she was just afraid of my screaming there,"

"I was pretty close to her. I'm definitely going to try to apologise to her if I did something wrong."

"You cannot be serious?!"

One of the most famous Wimbledon court tantrums came from former American player John McEnroe in 1981.

In a first round match against Tom Gullikson, McEnroe was so furious at the umpire for not allowing his serve, he screamed: "You cannot be serious!"

After his tantrum McEnroe went on to win the tournament, but his famous words in that match have been remembered forever, and even made it into pop songs and films. 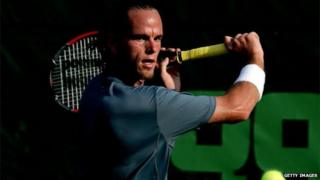 In the 2005 Miami Masters, Belgium player Xavier Malisse went on a bit of a rampage.

Unhappy with a line call he began to roll around on the floor refusing to get up and then began shouting at the umpire.

Xavier then kicked the umpire's chair and broke his racket before storming off court.

Tim Henman, alongside Jeremy Bates, become the first players to be disqualified from a tournament in the Open era when Henman accidentally hit a ball girl on the ear at Wimbledon in 1995.

In his rage the former British number one lashed out and hit a tennis ball at one of the ball girls, ending the match.

Henman later apologised to the ball girl and gave her a large bunch of flowers.