The BBC has revealed the final design of the Micro Bit, a pocket-sized computer set to be given to around one million kids in the UK.

The device has been created to help children get creative with tech and learn how to program.

It will be given away to every 11 and 12-year-old in Year 7 at school in October.

The Micro Bit can be connected to a Raspberry Pi, Arduino and Galileo
Flashing lights

The Micro Bit allows its users to write simple code via a new website, which will be used on both PCs and mobile devices.

Users will be able to save and test their programs on the site before transferring them to the tiny computer via a USB cable or wireless Bluetooth connection.

The Micro Bit can then be made to interact with its built-in sensors and buttons to make its 25 LEDs flash in different patterns, letting it display - for example - letters and numbers.

It can also be connected to other computing kits via its input-output rings - including the Raspberry Pi, Arduino and Galileo - to carry out more difficult tasks.

The Micro Bit can be powered via a USB cable, but will otherwise need a battery-pack accessory

The device was announced four months ago and it was then thought that it could be easily pinned to clothing.

But a revision has involved replacing a watch-battery slot with a bigger battery pack, which might make that less practical.

The programmable array of red LED lights - includes two buttons and a built-in motion sensor that were not included in the design shown off in March. 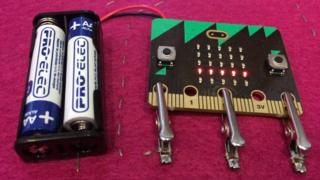 BBC Learning head Sinead Rocks said: "The BBC Micro Bit is all about young people learning to express themselves digitally.

"As the Micro Bit is able to connect to everything from mobile phones to plant pots and Raspberry Pis, this could be for the internet-of-things what the BBC Micro was to the British gaming industry."