Solar Impulse, the aeroplane that is powered only by the sun, has landed in Hawaii after making a historic 8,000km flight across the Pacific Ocean from Japan.

Pilot Andre Borschberg brought the vehicle gently down onto the runway at Kalaeloa Airport just before 6am local time (5pm British time).

The distance covered and the time spent in the air - 118 hours - are records for a manned, solar-powered flight. 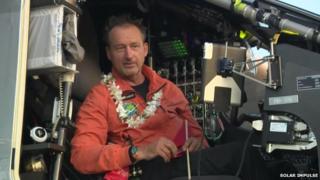 Meeting the Swiss pilot in Kalaeloa is his partner on the Solar Impulse project, Bertrand Piccard.

The pair are sharing flying duties in their quest to fly around the globe - an effort they began in Abu Dhabi, UAE, back in March.

Mr Piccard will now fly the next leg from Hawaii to Phoenix, USA, which will not be quite as far as the leg just completed, but it will still likely take four days and nights.

Solar plane: 'I feel like I can fly forever'