Britain's Andy Murray reached the third round at Wimbledon with an impressive win over Dutchman Robin Haase.

The Scot won 6-1 6-1 6-4 on court one in much cooler conditions than Wednesday's record-breaking temperatures.

He will face Italian 25th seed Andreas Seppi or Croatian teenager Borna Coric in round three on Saturday.

"I am very happy with the way I played," Murray told the BBC. 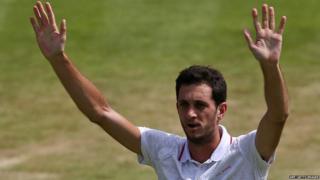 Another Briton, James Ward, is also into the third round at Wimbledon for the first time after beating Jiri Vesely.

Video available to UK users only

Wimbledon 2015: Meet the kids camping out in the queue