Women's World Cup: Are you proud of England's women? 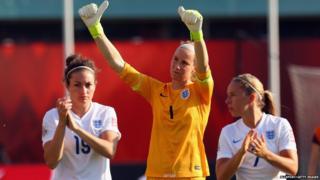 England have gone out of the women's football World Cup in Canada in cruel fashion scoring an own goal in stoppage time in their semi-final against Japan.

The Japanese will play America in the final on Sunday, while England have to settle for the third place play-off against Germany.

The Lionesses were attempting to reach their first World Cup final and only England's second after the men's team's victory in 1966.

We wanted to know how you felt England did overall.

England did really well. It was great the way they played and they didn't deserve to go out. But they will win the next one! Come on England!

They did so well! England is so proud of you guys don't take it so hard on yourselves. The mistakes just make you better and you can come back ten times harder. You brought pride to England!

I think the England women did great even though they didn't get to the finals!

I think the Lionesses played the best they've ever done making it to the semis. I do feel sorry for Laura Bassett, it was really unlucky. My England player of the tournament is Lucy Bronze.

Yes you did your very best and everyone is proud of you. You've inspired so many girls to play football including me. Never give up.

I am proud of England's women because they have done really well in the World Cup this year. I agree with James from Surrey that they definitely deserve to go through more than Japan.