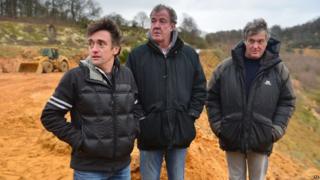 The final Top Gear programme with Jeremy Clarkson in has been shown on BBC Two.

Presenters James May and Richard Hammond also left the show when Clarkson's contract was not renewed, after he punched a producer.

After the episode ended, Clarkson tweeted: "Many many thanks for all your support and encouragement over the years. So sad and sorry it's ended like this."

Earlier this month, Chris Evans was announced as the new presenter of the show.

Evans has said he will have a female co-host on the show but its not been revealed who it will be.

Top Gear: Chris Evans confirms he will have a female co-host