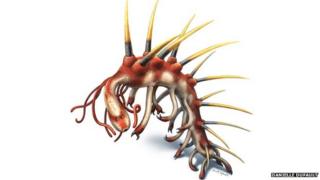 Danielle Dufault
Until now, scientists didn't know what the head of the Hallucigenia looked like

It looks weird and a little bit like a centipede but for many years scientists didn't know what this tiny sea creature actually looked like.

Now they have a complete picture of the missing face of one of nature's most bizarre animals called a Hallucigenia.

It lived 500 million years ago, but all the fossils that have been found so far appeared to be without heads.

Now new specimens unearthed from the Burgess Shale in Canada.

They have revealed its strange face for the first time. 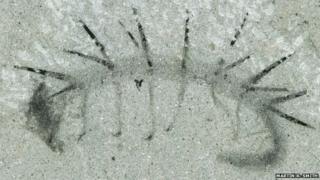 Dr Martin Smith, from the University of Cambridge, said: "It is like something from another world."

The first fossil was discovered more than 100 years ago, and it baffled scientists.

The creature was tiny - less than 2cm long and thinner than a hair - but very strange.

One side of its thin, tube-like body was covered in pairs of enormous spines, while stick-like claws dangled from its other side.

But by delicately chipping away at the rocks in Canada, scientists have now found a spoon-shaped head.

"When we put it into the electron microscope, we were delighted to see not just a tiny pair of eyes looking back at us, but also beneath them a really cheeky semi-circular smile.

"It was as if the fossil was grinning at us at the secrets it had been hiding," said Dr Smith.

Inside the creature's mouth, the researchers found a ring of teeth and then a second set of teeth running from its throat towards its stomach.

The scientists believed the tiny sea creaturesucked up food, then moved it down to its gut.

Scientists say the creature is helping them to learn more about the Cambrian Period - an important point in the history of life on Earth when most of the major groups of animals first appear in fossil records.