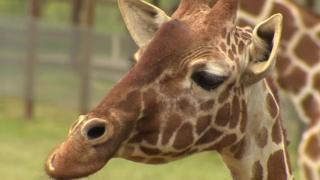 A special project is underway to find out whether a giraffe's long spindly legs help it to move better.

Scientists from the Royal Veterinary College, in London, have been to Whipsnade Zoo in Bedfordshire to watch the animals in action.

They're using special technology to measure the giraffes' leg movements.

It's hoped the information will help them find out if a giraffe's legs help it to move around or are a nuisance when it comes to walking.

A giraffe's long legs may help it to walk, but why are other animals the way they are?

Why do birds fly in formation?

When birds flock, or gather in a group, they can fly thousands of miles and scientists studying the northern bald ibis reckon they do this and don't run out of energy, because of the special way they fly as a group.

Why do giraffes have strong tongues?

Researchers think giraffes have super strong tongues, and elephants have really long trunks, to help them get lots of food and get it down fast.

Why are shore earwigs so smelly?

The shore earwig has a smelly way to stop insects and birds from eating it. It squirts out a horrible smelling substance that make the animals spit it out.

Why do zebras have stripes?

Zebras have bold stripes to protect them from being attacked, according to research from Australia. Scientists there say the black and white patterns work by dazzling and confusing predators, especially when zebras move as a herd. 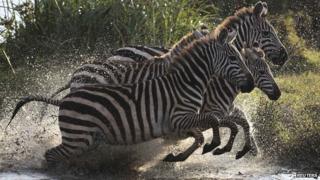 Why do starlings create murmurations?

When flying together starlings can create mesmerising patterns called 'murmurations'. It's thought it could be a way for the birds to protects themselves from predators, or a way of signposting a roost.

Why do starling 'murmurations' happen?

Why do birds fly in formation?

Is this the world's smelliest bug?