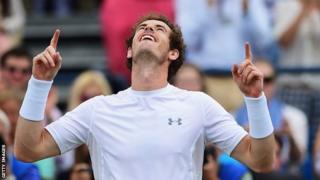 Tennis ace Andy Murray has become Queen's Club champion for a fourth time after an impressive victory over Kevin Anderson.

Earlier that day he'd finished a rain-delayed semi-final, beating Viktor Troicki, and then went on to play the final.

"I played better as the week went on and hopefully I can continue that into Wimbledon," Andy said.