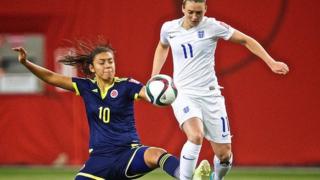 England take on Norway in knock-out

England will attempt to secure their first ever win in the World Cup knockout stages, when they face Norway on Monday night.

The team secured their place in the last 16 of the Women's World Cup with a 2-1 victory over Colombia on Wednesday.

Norway are ranked 11th in the world, but are so far unbeaten after their group games.

England are hoping not to have a repeat of the 2011, when they lost out to France on penalties in their first knockout match.

Watch the clip of England captain Steph Houghton saying how winning tonight will be a 'defining moment' for the team. England take on Norway in knock-out