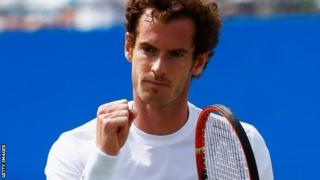 Britain's Andy Murray remains on course for a fourth Queen's Club title after a hard-fought win over Fernando Verdasco in round two.

The top seed came through 7-5 6-4 against Spain's world number 42 to reach the quarter-finals of the Aegon Championships in London.

"It was a tricky match," Murray told the BBC.

"I was happy with the way I moved. It was a little bit better than the first match."

It was the Murray's 11th win in 12 matches against Verdasco, stretching back to 2007.

Andy goes on to face Luxembourg's Gilles Muller, who beat Bulgaria's Grigor Dimitrov 6-4 7-6 (7-5), in the quarter-finals.