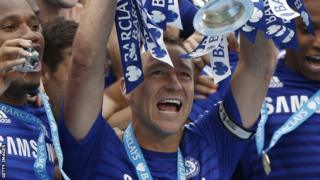 The fixtures for the new Premier League season have been published.

Current champions Chelsea, Manchester City, Arsenal and Manchester Untied will all be aiming to get their hands on the 2015-16 title.

They'll be joined in England's top flight by the three promoted teams - Bournemouth, Watford and Norwich.

Here's Newsround's rundown of all the opening matches and a pick of the season's big games.

Starting with a bang

Reuters
Manchester United will hope to hold on to world-class keeper David De Gea next season. Spanish giants Real Madrid are rumoured to want him

Chelsea will begin their Premier League title defence with a home game against Swansea on the weekend of 8-9 August.

The top-flight season starts a week earlier than last season as the 2016 European Championship starts on 10 June.

A key battle in the title race could come on the second weekend of matches, when Chelsea travel to Manchester City.

Chelsea are scheduled to play at Etihad Stadium on Saturday, 15 August, though the match may well take place a day later once television schedules are announced.

Getty Images
Which team's fans will be having a very merry Christmas this year?

Teams will play three times in eight days over the Christmas holidays, although there are no Premier League matches planned for New Year's Day.

Games will instead take place on Saturday, 2 January 2016.

Manchester United against Chelsea on 28 December stands out among the festive fixtures.

Arsenal will get two big early chances to show their title-winning powers - at home to Liverpool on 22 August and away at Chelsea four weeks later.

Manchester City's season includes exciting matches both near the start and end - they host Chelsea in their second game and welcome the Gunners for the second-to-last match, set for 7 May.

Manchester United host newcomers Bournemouth on the final day of the season.

Bournemouth, who won the Championship title, host Aston Villa in their first ever Premier League game, before away trips to Liverpool and West Ham.

Watford, who finished runners-up to the Cherries in the second tier of English football, have arguably the toughest of the opening games with a trip to Everton and then back-to-back home matches against West Brom and Southampton.

Play-off winners Norwich kick off with a home game against Crystal Palace before an away trip to Sunderland and a home fixture against Stoke.

There have been two occasions since the Premier League's first season in 1992-93 when all three promoted clubs have stayed up.

And there's only one occasion when all three promoted teams went straight back down.

Everton and Stoke face possibly the toughest starts to the campaign with a testing run of games.

The Toffees start with a home game against Watford but then face Southampton (away), Manchester City (home), Tottenham (away) and Chelsea (home) in their next four matches.

Stoke host Liverpool - a team they thrashed 6-1 on the final day of last season - then travel to Tottenham.

The Potters then have an away game to Norwich before they face West Brom followed by a clash with Arsenal at Emirates Stadium.

Bournemouth will hope to have banked enough points to stay in the top flight given they have a tough end to the season.

The Cherries face Liverpool, Everton, Chelsea and Manchester United in four of their last five matches.

Leicester City came into brilliant form at the of last season to secure survival, and Nigel Pearson will hope his side are in a good position by the time they face Manchester United, Everton and Chelsea in their final three games.