Guide: The Battle of Waterloo 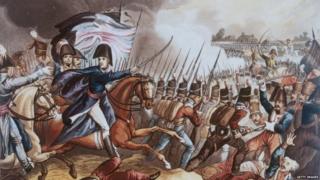 The Duke of Wellington, with his army made up of British troops and Dutch, Belgian and German soldiers.

And Napoleon with his French Imperial Guard.

It was a showdown between two of history's military giants.

They were the same age, incredible leaders and had a string of victories behind them.

Napoleon had been trying to create a European empire under his rule since 1804. 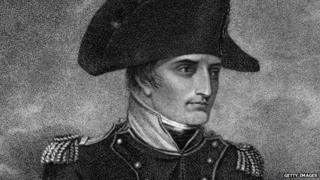 In 1805, the British defeated him at the Battle of Trafalgar.

But that didn't stop Napoleon - he went on to invade countries across Europe before being forced to give up his power.

He returned to Paris in March 1815, prompting Britain, Russia, Austria and an historic state called Prussia, to declare war.

In June of that year, Napoleon invaded Belgium, hoping to take over the capital Brussels.

The Duke of Wellington and his army was waiting and Napoleon sent troops to fight him.

At the same time he led an attack against General Blucher's Prussian troops.

The scene was set for a final battle.

Before the battle, Wellington stayed in Waterloo while Napoleon was three miles south. Their men slept outside as rain fell throughout the night. 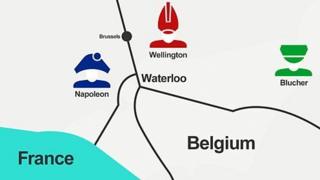 The positions of Wellington, Napoleon and the Prussians the night before the battle

With the Prussians and Wellington's armies separated, Napoleon was confident he could defeat the British and make his way to Brussels.

Wellington and his troops blocked the road to Brussels in order to stop Napoleon's men heading towards the capital. 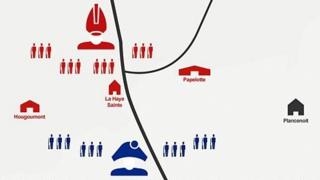 Wellington knew he was outnumbered - approximately 68,000 Allied troops versus Napoleon's 72,000 - so he positioned his men behind a ridge and three farms that were heavily defended.

His presence on the field made the difference of forty thousand men.

The steep hills, fields of high corn and a well-placed group of troops on the farms meant Wellington had a good viewpoint and lots of cover to protect his army.

From here he could try to hold the ground until the Prussians troops, which had retreated in the previous battle, arrived to help him.

Because of heavy rain that had fallen through the night Napoleon decided to delay his first major attack until the ground had dried out. 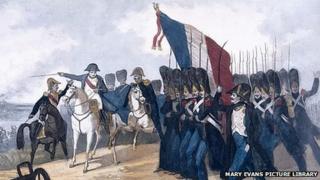 Napoleon's first move was to launch an attack on Hougoumont farm.

The attack on Hougoumont 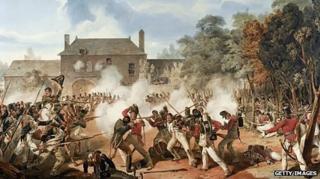 No troops but the British could have held Hougoumont and only the best of them at that.

Led by his brother 5,000 troops headed to the farm, outnumbering the 1,500 British soldiers that were there.

The attacks at Hougoumont lasted all day.

At 12.30pm, they broke open the gates but the British quickly closed them again, trapping 40 French soldiers inside. They killed all but one - an 11-year-old drummer boy.

With a big chunk of Wellington's army defending Hougoumont, Napoleon took the opportunity to attack more of his troops.

He sent 18,000 soldiers along the road to Brussels to capture the farm of Papelpotte and the surrounding area. 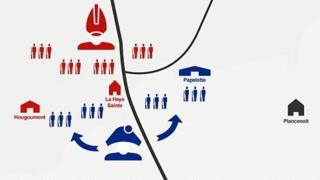 It looked like victory was now within Napoleon's grasp. If he took the other farm, La Haye Sainte, he could attack the remaining British troops at close range.

But at around 1pm, looking through his telescope, Napoleon saw something on the horizon and sent a troop of horsemen to investigate.

Wellington on the ropes

It was the Prussians, who had come to help Wellington and his troops, but they were still far away. 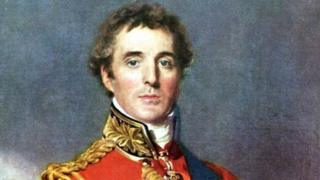 The Duke of Wellington led the joint forces of British, Dutch, Belgian and German soldiers at the Battle of Waterloo

With Napoleon's men advancing towards the British Wellington had to do something - he sent the British horse guards to charge at the French.

Napoleon's line had been weakened but Wellington's army was also damaged - he couldn't afford to launch another attack without extra help.

At the same time Napoleon's cavalry came face to face with the Prussians, who had come to help out Wellington.

They met near Plancenoit, a village 5 miles east of the battlefield. 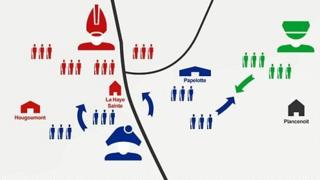 It didn't take long for the Prussians to defeat them and take over the high ground north-east of the village.

He is a bad general and the English are breakfast!

This led to Napoleon sending more troops over to try and win back the high land - meaning the French army was split up.

Wellington could hear the cannon fire in the distance - he knew the Prussians were doing what they could to help him.

The battle for La Haye Sainte 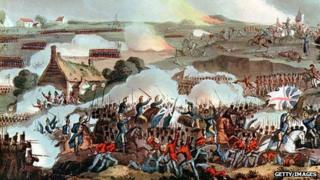 Napoleon's men were now fighting on both the west and east sides of the battlefield.

He ordered one of his men, Marshal Ney to attack the area where Wellington had the most troops. 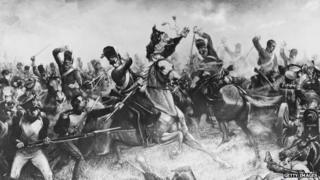 Getty Images
The British forces charge at the French soldiers

For the next two hours, wave after wave of heavily armoured French soldiers on horseback charged at them.

They managed to held off the 4,000-strong French attack but their new formation made them an easy target to Napoleon's heavy gun fire.

After hours under attack, Wellington finally lost the area where his strongest army had been fighting. 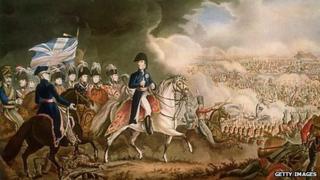 Getty Images
Wellington on the ridge, with a view over the battlefield

It was a crushing blow. Napoleon was now able to bring the French gunmen forward and attack the rest of his troops.

All Wellington could do was fight back as much as possible and wait for the Prussian's to help them.

Wellington's men waited in the long grass behind the ridge as the French Imperial Guard headed towards them, 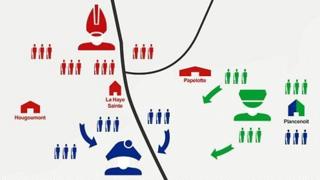 The French retreat as Wellington's troops advance, joined by the Prussians arriving from the east

When they reached the ridge, Wellington gave the order to stand and fire.

At the same time the Prussian's started to arrive.

The joined forces and attacked the French.

Wellington had a chance to kill Napoleon but ordered his men to hold fire. The Emperor was shielded by his men as they fled. 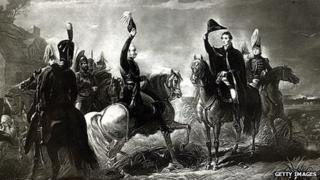 Getty Images
Blucher and Wellington celebrate their victory over Napoleon

The Battle of Waterloo was over. Wellington had won.

The battlefield was covered with tens of thousands of bodies. Many were dead, others badly wounded and left to die.

As punishment, Napoleon was sent to the island of Saint Helena in the South Atlantic Ocean, where he died in 1821. 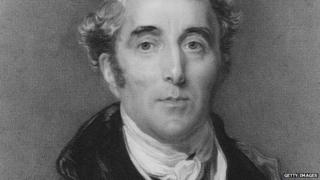 Wellington was a hero: he secured a peace deal with France and became prime minister in 1828.

For now, there was peace in Europe.