Andy Murray made a winning start to his grass-court season with a straight-sets win over Taiwan's Yen-Hsun Lu at Queen's Club in London.

The Briton won 6-4 7-5 at the Aegon Championships and will play Spain's Fernando Verdasco in round two.

Murray, the top seed and a three-time champion, fell behind in both sets but came through in one hour and 19 minutes. 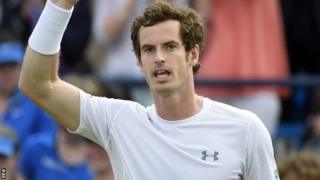 "But it's an extremely strong field this year, stronger I think than any years previously, so I'm going to have to play good tennis if I want to do well this week."

Rafael Nadal made an early exit at Queen's Club with a three-set defeat by Ukrainian Alexandr Dolgopolov.

"I was fighting in every point," Nadal said.

"I'm not happy I lost a match that I had a chance to win, but that's it. That's tennis on grass."