Guide: Who is the US First Lady Michelle Obama?

US First Lady Michelle Obama has visited a school in London to talk about girls' education.

It's part of an initiative called Let Girls Learn, which wants more girls around the world to go to school and complete their education.

Michelle's mum and two teenage daughters, Malia and Sasha, are also joining her on her visit to England.

But who is Michelle Obama, and what does she actually do?

Who is Michelle Obama?

Michelle is married to the current US president Barack Obama. This means she has the title of First Lady of the United States.

They met when they both worked at the same law firm. 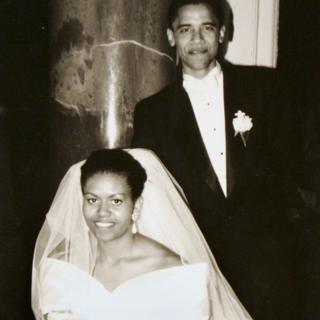 AP
Michelle and Barack Obama on their wedding day.

They have two teenage daughters, Malia and Sasha, and together with Michelle's mum, they live in The White House in Washington D.C. - the official home for the American president.

Michelle grew up in the US city of Chicago with her parents and older brother Craig.

Growing up her hobbies included playing the piano - in fact she played it so much that she had to be told to stop. 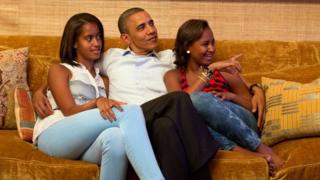 Despite her family not having much money when she was younger, she went to university and became a lawyer.

What does she do?

She's also well known for her fashion sense and her love of sleeveless dresses. 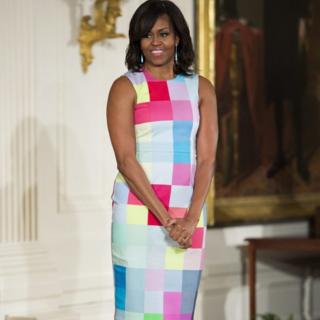 EPA
Michelle's the joint tallest First Lady that there's ever been at 180cm.

As part of this she even danced to Uptown Funk at the White House.

She also campaigns to help girls around the world go to school and stay in school through the Let Girls Learn initiative.

Mrs Obama wants young people across America to take charge of their future and complete their education past high school.