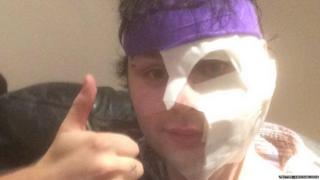 Five Seconds of Summer guitarist, Michael Clifford, has told his fans that he's "feeling loads better" after getting hurt on stage in London.

The band had to stop their gig at Wembley Arena after his hair and face were burnt by a flame that was being used during the concert.

The 19-year-old was treated in hospital and later posted a picture of his face in bandages.

He has sent messages on social media saying that his "face is fine". 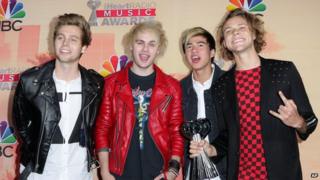 The Australian star is not the only famous performer to have suffered an onstage accident.

Here's Newsround's look at some of the most awkward slip-ups.

In 2013, One Direction's Louis Tomlinson took a tumble half way through performing the group's single 'Kiss You' after a water fight at their gig in Adelaide, Australia.

But it did not stop Louis, who carried on singing as he lay on the stage.

The rest of the 1D boys made the most of the mishap too, spraying Louis with more water as he lay flat on his back. 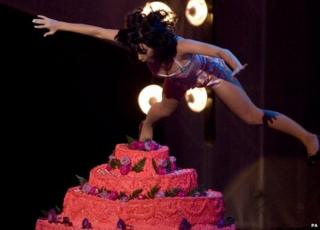 Katy Perry loves putting on a show every time she gets up on stage to sing but it doesn't always go to plan.

In 2008, she decided to end one of her performances with an incredible stunt: diving into a large four-tiered cake.

But it all started to get messy when Katy tried to stand up and walk off stage. 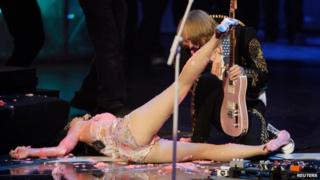 The large amount of icing caused the star to take a second dive, this time slipping all over the stage.

A band mate did his best to help her, but there was no stopping Katy falling all over the place

Olly Murs had a bit of an embarrassing moment back in 2012 when performing at a music festival.

He was singing a cover version of Stevie Wonder's song 'Signed, Sealed, Delivered' before deciding to run down the stairs next to the stage.

Olly ended up getting his feet in a twist and tumbling down the steps. 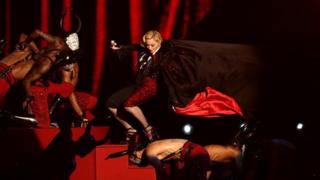 Pop star Madonna fell off the stage during her performance at the 2015 Brit Awards.

Madonna tumbled down a set of stairs and landed awkwardly, apparently after a dancer tried to remove a cape she was wearing at the start of her routine. 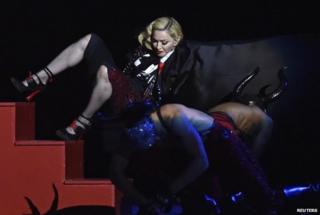 But she recovered and returned to continue her song, 'Living For Love'.

The 56-year-old issued a statement later saying she was "fine" and that her cape had been "tied too tight".

Foo Fighters star Dave Grohl broke his leg after falling off the stage during a concert in Gothenburg, Sweden.

The band were two songs into their concert at the Ullevi stadium when the singer went to jump on a ramp but missed and fell into the security area.

"I think I just broke my leg," Grohl told the crowd as he lay on the ground.