The European Space Agency (ESA) says its comet lander, Philae, has woken up and contacted Earth.

Philae, the first spacecraft to land on a comet, was dropped on to the surface of Comet 67P by its mothership, Rosetta, last November.

It worked for 60 hours before its solar-powered battery ran flat.

The comet has moved nearer to the sun since and Philae has enough power to work again, says the BBC's science correspondent Jonathan Amos. 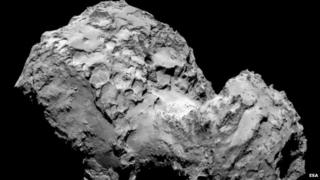 Esa
Philae landed on Comet 67P after a 10-year journey

The Philae craft made three short contacts of about 10 seconds each at roughly 9.30pm on Sunday.

The probe sent the message: 'Hello Earth! Can you hear me?"

Scientists say they now waiting for the next contact.

What is the Philae lander? 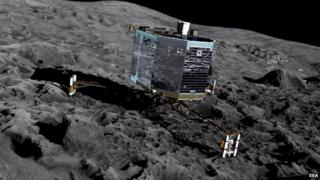 Philae is designed to analyse ice and rock on the comet.

The Rosetta probe took 10 years to reach the comet, and the lander - about the size of a washing-machine - bounced at least a kilometre when it touched down.

Before it lost power, Philae sent images of its surroundings which showed it was in a type of ditch with high walls blocking sunlight from its solar panels.

Its exact location on the comet has since been a mystery.