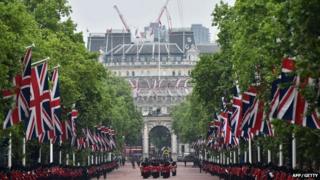 AFP/Getty
Guardsmen marched along the Mall away from Buckingham Palace

Prince George has joined members of the Royal Family on the balcony of Buckingham Palace for an RAF flypast to mark the Queen's official birthday.

The Queen is celebrating her official birthday with the annual Trooping the Colour parade in central London.

More than 1,000 soldiers are taking part in the traditional display of of army drill, music and horsemanship.

The Queen and Duke of Edinburgh travelled by carriage from Buckingham Palace to Horse Guards Parade.

The Duchess of Cambridge is making her first public appearance since she left hospital following the birth of Princess Charlotte. 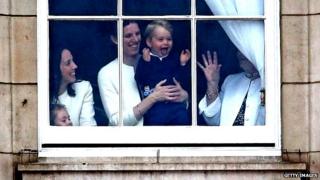 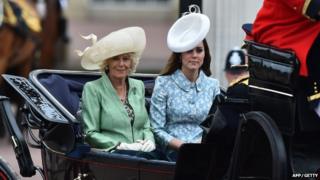 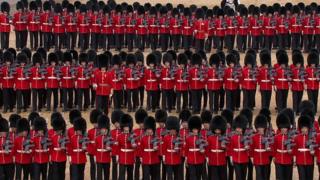 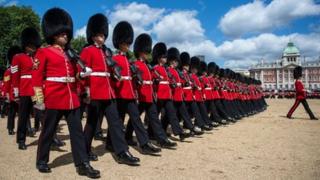 Trooping the Colour originally happened when preparing for battle.

Colours, or flags, were carried, or "trooped", down the rank so that they could be seen and recognised by the soldiers.

In the 18th Century, guards from the royal palaces assembled daily on Horse Guards to "troop the colours", and in 1748 it was announced that the parade would also mark the sovereign's official birthday.

The Queen's actual birthday was on 21 April, when she turned 89. The Duke of Edinburgh celebrated his 94th birthday on Wednesday.

It is the 63rd time the Queen has attended a birthday parade, a record unmatched by any monarch.

Catherine, the Duchess of Cornwall and Prince Harry travelled together in another coach. 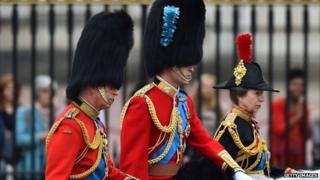 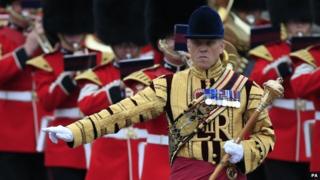 The battalion last Trooped the Colour in 2013, but they are doing it again to mark their centenary year.

Since the last Queen's Birthday Parade, elements of the battalion have been on training exercises at home and abroad in places including the Falklands, Canada, Kenya, Kazakhstan and Belize.

Four of the five Foot Guards regiments of the Household Division - the Welsh Guards, Grenadier Guards, Scots Guards and the Coldstream Guards - are marching in the parade wearing bearskin hats and red tunics. 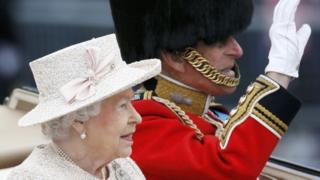 Reuters
The Duke of Edinburgh, who accompanied the Queen in her carriage, celebrated his 94th birthday on Wednesday 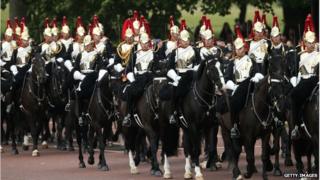 Among the 31 aircraft taking part are Spitfires and Hurricanes, made famous in the Battle of Britain 75 years ago, and also modern jets including the multi-role Typhoon fighter.

The Red Arrows will be in the finale.