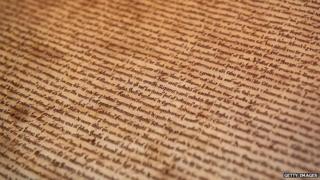 Today marks the 800th anniversary of the sealing of Magna Carta.

They were documents that set out a list of basic rules about how the country would be run.

But why is it so important? Here's Newsround's guide to Magna Carta.

How many Magna Cartas?

The Magna Carta was written, or 'drawn up' in 1215, in Runnymede on the banks of the river Thames.

At the time the king of England, King John, was fighting with other powerful landowners.

The landowners, called barons, were unhappy with the way the king was running the country and the amount of money he was taxing them.

Magna Carta means 'great treaty', and it was written to make the barons happy and to stop the fighting.

It set out a list of basic rules about how the country would be run.

One of the most important, was that no one was above the law - including the king.

King John signed it (he actually put his seal on it) which meant that the clauses named would apply to everyone.

Once the original copy was made, it was then copied about 250 times and taken around the country so it would apply everywhere. 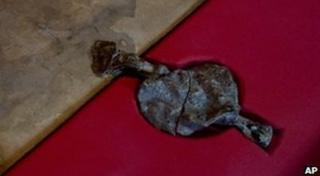 AP
The king's seal was on the original, which was his way of saying he agreed with it.

It's often referred to as one of the most important documents in history.

That's because it set out a list of rules that applied across England for the first time.

And whilst not many of these rules still exist - they created the idea that a law should be in place.

Some of them are things that we take for granted today.

The idea that the law should still apply to the king or queen, that everyone should have a fair trial, and that people shouldn't be taxed too much were all created in the Magna Carta.

The Magna Carta was meant to stop the fighting in England - but it didn't.

Just weeks after is was written, King John said he didn't like it - and so it didn't count.

But after King John died, his successor Henry III thought it was a good idea and brought it back.

How has it affected life today? 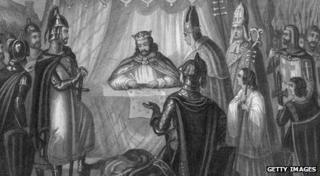 Getty Images
King John signing the Magna Carta has inspired lots of different works of art. Experts don't think it happened like this though.

Some historians think it was the start of the freedoms and political rights people in the UK, and other parts of the world, have today.

They think that is was a huge moment in history - that led to society becoming more equal eventually.

But others disagree and don't think it was that important.

The rules, or clauses, it brought in only applied to less that half of the population at the time.

And out of the 63 rules included, only 3 are still part of the law today. 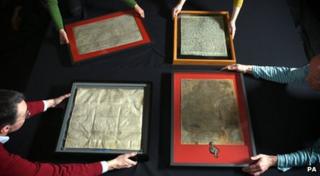 PA
The four remaining manuscripts from the original Magna Carta

There are only four copies of the original document remaining.

Each copy had to be hand written, which took time and lots of skill and patience.

Because it was such an important work, you might expect them to be beautifully decorated as many documents were at the time.

But it's actually quite plain looking.

Experts say that's because it was meant to be a working document, and needed to be used so people could look at the new rules regularly.