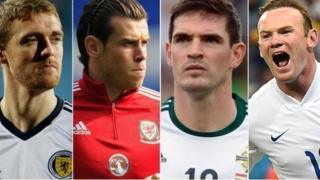 Scotland, Wales, Northern Ireland and England are aiming to be among the 24 teams at Euro 2016

With the latest round of Euro 2016 qualifiers almost over England, Northern Ireland, Scotland and Wales are all still hoping that they could reach next summer's tournament in France.

The four nations have never previously qualified for the same major international tournament at the same time but this qualifying campaign has raised the prospect of that finally becoming a reality.

Why is there such hope? For a start, the finals have been expanded from 16 to 24 teams.

A solid start from all four sides to their qualification groups has also offered encouragement.

Getty Images
Aaron Ramsey, Gareth Bale and their Welsh teammates will qualify for Euro 2016 if they win their next two matches

But with just a few games left now just how realistic is the prospect of all four sides making it through to France?

How do you qualify?

The third-placed side with the most points (but not counting those earned against the team finishing sixth in groups as one group has five teams) will also make it.

This leaves eight other teams who have finished third who will go into play off over two legs to provide the final four sides. Hosts France qualify automatically as hosts.

So how are close are the four home nations?

So far in Euro 2016 qualifying: A trip to Switzerland presented a tough early test for England, particularly after they went out of Brazil 2014 without winning a game.

But Roy Hodgson's side passed that with merit as Danny Welbeck scored both goals in a 2-0 win in Basel.

Danny has gone on to be top scorer in qualifying on six goals as England have raced to six wins from six.

After featuring in England's unsuccessful Under-21 European Championship campaign, Kane returns to the senior side for whom he made his goal scoring debut in the 4-0 win over Lithuania in March.

A 6-0 victory against San Marino in September 2015 saw England secure their spot at next summer's Euro 2016 finals in France.

England captain Wayne Rooney: "Since the World Cup we have been fantastic. A lot of teams around Europe will be looking at this team and will be frightened."

Scotland now need the Republic of Ireland to lose both their remaining games and hope they can get four points in order to qualify.

So far in Euro 2016 qualifying: Scotland came out of their first qualifier without a point but plenty of positives, pushing world champions Germany all the way before falling to a 2-1 defeat.

Since then they have beaten Georgia and the Republic of Ireland 1-0, and drew 2-2 with Poland.

Gordon Strachan's side kept up their good form by thrashing Gibraltar 6-1 with striker Steven Fletcher bagging a hat-trick.

In June, Scotland managed a 1-1 draw against the Republic of Ireland.

But with at least a third place finish in their hands Scotland have had a disastrous last round of matches.

They suffered a shock defeat to Georgia, followed by a 3-2 loss to World Cup champions Germany.

The next hurdle: Those results mean that in order to qualify for the third place play-off Scotland need four points from their remaining two games, against Poland and Gibraltar, and hope that Republic of Ireland lose their last two matches.

Scotland defender Russell Martin: "I expect us to be in France. I believe that 100 per cent and I'm sure everyone in the squad would tell you the same."

Gareth Bale seems determined to play at a major tournament and the Real Madrid star will play an important role in the final qualifying games.

Confidence is high among Coleman's men, who have lost only once in the past 11 matches and are top of Group B.

In September, Wales beat Cyprus 1-0, taking them a step closer to qualification but agonisingly missed out on a win against Israel that would've confirmed their place at Euro 2016.

The next hurdle: They will guarantee qualification with two points from their last two games against Bosnia and lowly Andorra.

Wales boss Chris Coleman: "The heat is on, the pressure is on, and this is where you find things out about yourself. We're good enough and strong enough to handle it and we've got to do that."

Find out who is in the Wales squad right here

So far in Euro 2016 qualifying: Without a competitive win away from home since September 2010, Northern Ireland managed to secure a famous 2-1 victory against Hungary in September 2014.

It proved a springboard for wins against the Faroe Islands and Greece.

Victory over Finland in March kept them in touch with group leaders Romania.

Northern Ireland have never qualified for the finals of the European competition and the last time they qualified for a major tournament was the 1986 World Cup in Mexico.

In the September round of games Michael O'Neill's side beat the Faroe Islands in Torshavn to mean they were one win away from automatic qualification.

The next game was at home to Hungary but things did not go to plan. Trailing one nil in injury time Kyle Lafferty got a last minute equaliser which means it's all to play for in their final two matches.

The next hurdle: They have difficult games to come against Greece and Finland. A win in either match would book their place in the finals.