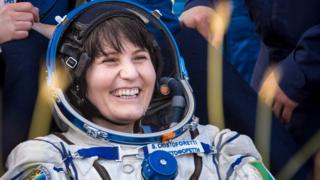 Three astronauts from the International Space Station (ISS) have returned to Earth.

One of the astronauts, Samantha Cristoforetti from Italy, has even set a world record.

She has spent the longest time in space than any other woman on a single mission.

Here's a list of six things Samantha has been doing during her extraordinary time in space.

Samantha has been on the ISS with her crewmates, Anton Shkaplerov and Terry Virts, the commander of Expedition 43.

The ISS offers three state-of-the-art laboratories where research and experiments can be done without gravity.

Samantha's work in space is devoted to science and maintaining the weightless research centre.

It's definitely not the worst job in the universe!

Food is an important item in space , not only to give your body the nutrients its needs but also to help your mental well-being too.

That's why astronauts are allowed a certain amount of "bonus foods" of their choice that reminds them of things they would eat back on Earth.

Whilst on the ISS, Samantha showed us how she manages to cook one of her bonus food recipes in microgravity: a quinoa salad with dried tomatoes, mackerel and leek cream, all wrapped in a warm tortilla.

We all know that exercising and staying fit is a big part of having a healthy lifestyle. But when you're in space, it's not that easy!

You can't run around in the park or go for a swim like we can on Earth.

Samantha was on the ISS for nearly seven months and the only way to keep an astronaut's muscles and body active is by visiting the 'space gym'.

Time for a chop

We all like to get a fresh haircut and it's no different for astronauts living in space.

But it's a bit more tricky to do in zero-gravity.

Samantha got a haircut on the ISS by her Nasa colleague Terry Virts while cosmonaut Anton Shkaplerov had to hold a vacuum cleaner, making sure that no hair cuttings float off.

One of Samantha's favourite hobbies in space was reading out rhymes with a inter-galactic twist.

After previous readings in Italian and Russian, she was keen to do a reading from space in English.

Based on suggestions collected from her social media followers, check out her version of Twinkle, Twinkle Little Star.

Not many people have had the lucky opportunity to live on the International Space Station.

The astronauts on the Space Station spend as much time as possible working on science.

But once you're up there, people like Samantha get a chance to view Earth in the most spectacular of ways.

It's pretty hard not to be mesmerised by the view looking down on the whole world.