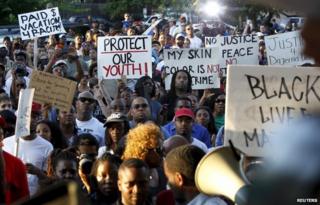 Close to 800 people marched through McKinney, a city of almost 150,000 people, carrying signs with messages including "My skin colour is not a crime" and "Don't tread on our kids".

However, some local residents defended the policeman's actions.

"Our policies, our training, our practice, do not support his actions. He came into the call out of control and as the video shows, was out of control during the incident.

"I had 12 officers on the scene and 11 of them performed according to their training. They did an excellent job."

Mr Conley added that the authorities were continuing their investigation of Friday's incident.

In a video that is more than seven minutes long, Cpl Casebolt is shown swearing at a number of black youths, pointing his gun at others, and pulling the girl by her arm, before pinning her to the ground with his knees.

What happened in Ferguson, USA?