Illustrator and author Chris Riddell, who created the Goth Girl series, has been named as the new Children's Laureate until 2017.

The Children's Laureate is a well known writer of children's books who promotes and encourage children's interest in books, reading and writing.

A new one is chosen every two years and he takes over from author Malorie Blackman who held the post before.

Chris Riddell has written and illustrated his own books.

But he's also worked with many other popular children's authors such as Michael Rosen, Neil Gaiman and Quentin Blake.

He says his mission for the next two years is to encourage "drawing every day" and he wants kids to doodle more.

"There comes a point where children decide that they can't draw. I want to say, 'don't stop drawing - carry on, and do a sketch a day. I think stories can grow out of the visual. It can be an engine for literacy." 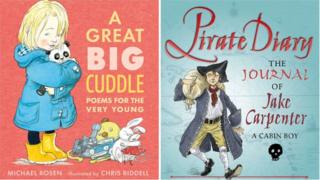 Chris Riddell said "I'm interested in illustration in all its forms. Not only in books for children but in posters, prints and performance, as a way of drawing people into books and stories."

"School librarians play such an enormous role in bringing children to books they are going to enjoy. It's a magic alchemy when that works."

Malorie Blackman's top tips for how to write a book